5:00 AM arrived in Russellville
Turn around and drive back home not even going to Mt Nebo.

7:00 AM Arrived back at home and went to bed

Spend the rest of the day in bed

Just not feeling it.  Don't know if it is mental or this damn headache.


Posted by shebalynnx at 5:21 PM No comments:

Of Being Shattered By The Mountain and Hitch Hiking 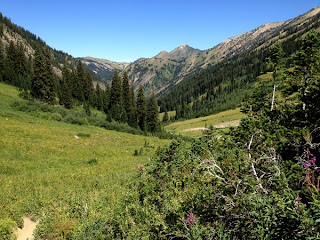 The plan:
-Manage every step of the race.  Judsonia is at an elevation of 213 ft above sea level.  This race goes from 7,000 - 10,000 ft.  I knew this would be a problem, but thinking if the downhills and flats were perfectly managed maybe the climbs could be handled.
-Hydration:  double all amounts usually consumed at this altitude keeping the brand used on the course in my hydration pack.
-Fueling: mostly rely on the EFS in the hydration pack, supplement with Epic Bars, Jelly Belly Sports Beans, and Gu.

I was SCHOOLED by the mountain!

The climbs were killer.  I would have to hike 10 steps rest, hike 20 steps, rest, hike 30 steps, rest, depending on the climb.
Much mental struggle went into picking an attitude here.  During those breaks I would look for something beautiful (not hard out there) and take a picture.  This helped my mind keep from going to negative places.  I decided being shattered mentally by not finishing this wasn't worth the effort.  It would be like being upset that I will never qualify for the Olympic Trials Marathon.  I gave it everything.  The mountain just schooled me, that is all.  It wasn't a lack of will or a lack of try, it was a lack of air!
The race had a 6 hour cut off to get to the turn around.  It took me 8 hours!
The hitch hiking....... a runner told the turn around people she was the last runner.  They waited 1/2 hour and then packed it up and went home.  I didn't have a way out of the turn around.  Fortunately it is a popular hiking spot and I, at 47, hitched my first ride.  Thank you to the kind family who loaned me the back of your pick up truck to get me out of there.
This problem hasn't happened in the past.  The RD has been addressed about this issue and it will be taken care of to prevent it from happening again. 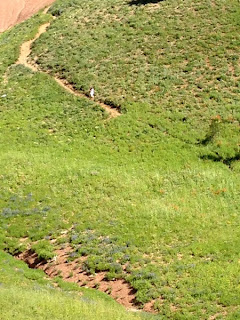 
My brother was here to run the race.  Rich didn't have the race of his plans either, but still had a grand finish!

The course was very well marked.  Every aid station was perfect with plenty of aid and helpful volunteers.  No fear of running out of water on a hot day either.  I'm confident the one issue, though a big one, will be addressed, so I would highly recommend this race so the altitude can shatter you too!! 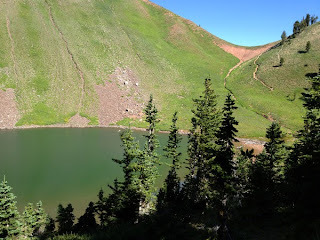 Posted by shebalynnx at 6:36 PM No comments: