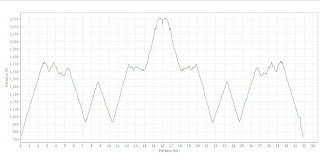 January 1, 2016 was my first day caffeine free in about four years.  I have been self medicating for a concussion received in a horse riding accident with caffeine.  It has become ineffective in this use and it has been hard on my body.  So the hope is that with out using energy shots to self medicate I can use then in races and they will help and I will be healthier the rest of the time.
The week has been interesting to say the least.  I left the stove on when I went to bed.  Showed up at a party a day early, one other big deal thing but I don't remember what it is.
Well, Saturday was another Brain Fart!  Athens-Big Fork Trail Marathon starts at 8:00AM, I showed up at 8:20AM thinking it started at 9:00AM.  Yup, brain fart for sure!
The night before was spent in a wee dinky hotel in Mount Ida.  Thunder was the white noise provided for the whole evening.  The drive to the race was slower than expected as it was still raining and the roads are winding.  At about 3/4 mile from the race start I knew my mistake when I saw a sheriff's vehicle at the first turn off of the main road onto the side road.  About a half mile from Big Fork Community Center I saw two runners.  Upon seeing those runners I knew what had happened.
I signed in, pinned on my bib number, and knowing I would not make the marathon cut off, grabbed my adventure camera to have fun out there on the way back from the fun run turn around.

I met some guys out there doing some epic stuff!  They started Thursday on a known loop out there.
They knew the weather was going to be cold, they knew it was going to rain, they knew about the mountains and the climbs, they went anyway.  That is badass! They backpacked the Eagle Rock Loop possibly backpacking 26.7 miles. 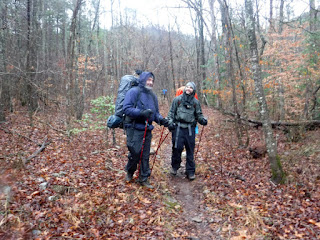 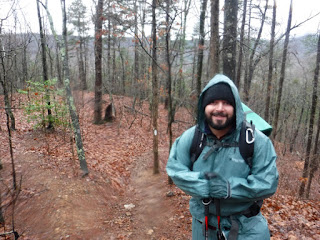 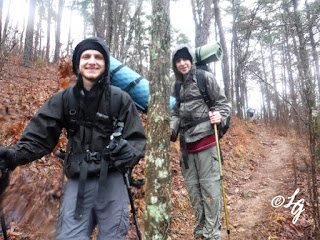 I had set this as my next key race after the Arkansas Traveller 100.  I had it so smartly worked out.  If one has a huge goal you have to think beyond the goal, plan beyond the goal, have a plan for after the goal is met or the date is passed so as to have something to focus on after that goal.  Athens-Big Fork Trail Marathon was that goal, making the cut off to run the full marathon (being at Blaylock Creek by 10:30 AM).  Starting the race 30 minutes late made this goal not workable from the starting line.  So the next goal would be to worked on was getting to Blaylock Creek in under three hours which would improve my two other attempts.
After not even making that goal the next thing to do was have fun on the way back, so that I did.  I greeted other runners, took pictures and just generally enjoyed the trip back at a leisurely pace. 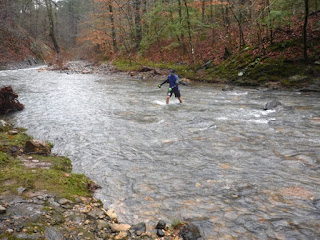 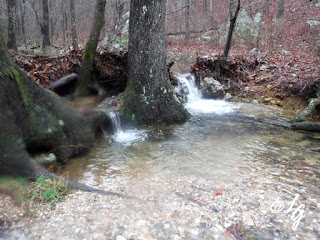 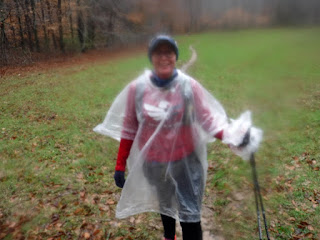 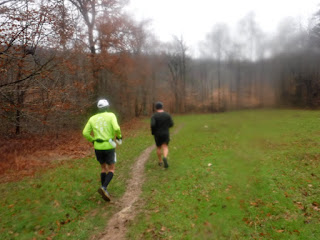 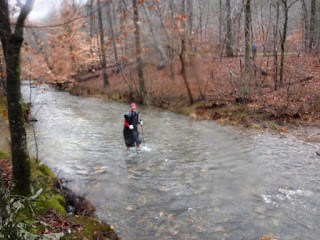 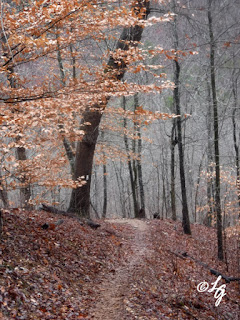 After the Traveller I still hit a funk, even with a goal.  The summer was spent out in the woods, running, thinking, praying, focused training, then that was gone.
I have never really gotten back on track.  I'm still 10 pounds heavier than Traveller taper weight.  I haven't done consistent core work, yoga, push-ups any consistent cross training since the Traveller.   This is not how one meets a goal.

The mountain never lets you lie to yourself.  If you get cocky, it will humble you.  If you lie to yourself, it will make you face the truth.  Facing the truth is exactly what happened.  I have a choice.  I can stay in this middle land of not quite in shape, not quite getting to running weight, not quite meeting goals or I can get back on track and get things done.  Its time to write down workouts, dates, training plans, menus and get back on track.

The mountain will tell if once again I'm lying to myself or if I'm finally getting squared away.

Meditation works!
I was able to note discomforts and then let them go.  Not once, out loud or in my head did I complain about discomforts, just note and let go.  Thank you meditation!

Until I get this brain thing figuted out, don't hesitate to have friends or family check and double check my schedule.  Its the smart thing to do to get help when it is needed.

I need to carry a lens cleaning cloth in a small ziplock bag.

Nutrition and hydration were great.

Catch snowflakes on your tongue whenever life gives you the chance!  Its fun to play! OUT THERE!


Posted by shebalynnx at 4:57 PM No comments:

The Old And The New

I found some old running blog posts on a different blog.

My introduction to AURA, the running family that would so profoundly change my life!
Catsmacker June 2009

On signing up for my first 50K

I did not properly prepare for Athens Big Fork Trail Marathon that is upcoming this weekend, January 9, 2016  I'm up 12 lbs from my pre-Traveller taper weight.
This is day five without caffeine.  I'm going off the energy shots, like 5 Hour Energy, to be able to use them as a tool on race days, especially the 2016 edition of the Arkansas Traveller 100.
I use energy shots to boot, re-boot my brain or prevent it from "sundowning" in the evenings.  I have been doing this since the concussion May 2012.  This has been the only  way to get through computer work and anything where I have to do math, write numbers, dates, letters or remember anything!

It has been a very challenging week.  That is an understatement for sure!

Posted by shebalynnx at 3:46 PM No comments: