Catsmacker tomorrow is the closing "party" for the AURA UTS Series.  This was the first AURA run I participated in way back in 2009.  This was the first time I met these crazy trail runners and found my forever family, a place I finally belonged.  Over the years I have run some full runs, some half runs so called Kitty Run, and even missed some.  It holds a special place in my heart and even though the date changes from year to year, it is my AURA anniversary.  I look forward to the hugs, laughs, maybe tears, sweat and rainy run tomorrow with friends old and new.
This year The Catsmacker is 22ish miles long with the Kitty Tickler option of 12ish miles.  80 - 90% chance of rain with thunderstorms with temperatures in the mid-70's.  Spring/summer rain runs are a favorite for me.  Its so amazing to be out there, wet, warm, amazingly at peace and happy. 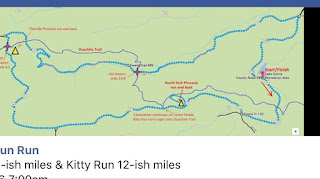 I'm still not running.  Yesterday was the first morning run for Run Searcy Loco, a running group to try mimicking Conway's Loco running group.  We laid down three miles with a run/walk.  I was okay, my foot was okay.

Later in the afternoon I took Mikey  to the wildlife refuge for a walk.  We hadn't been out there in two months and Mikey sure was missing walks/runs with Mama.  Well, with all the rain of late, flooding rain, days of 24 hours of rain, not much out there was accessible.   We got two miles in.  My mistake was to wear my Chacos with no ankle brace.  I was "just" walking.  Well, that mistake may have set healing back a bit.  It was a bit more sore for the rest of the day.

So on to the plan:
Yoga 2x a week
Strength training 2x a week
Heat Training - Mow the lawn in the hottest part of the day as needed (push mower)
Run more in the morning
Use the evening "runs" as a hiking fast practice
Eat smartly - use Faster EFT to control behavior
Meditate daily at least 5 minutes
Push-ups for negativity and cussing

20 weeks + 3 days till the Traveller.  This foot will slow my mileage down.  I will be stronger when I can run.

Posted by shebalynnx at 11:37 AM No comments:

April wasn't a normal April in our world.  Kim was injured multiple times in work related car wrecks.  After many years of pain and almost a year off work she finally got back surgery approved.  She had her surgery April 2, 2017.  I flew out on the 7th of April to spend two weeks helping her recover.  Her husband, Gregg, had to go back to work at that time.

It makes all the teen drama, all the heartache of parenting worth it to have this kind of friendship with adult children.  Life is so good, and so very worth the struggle.

Priority while in Maryland wasn't running or my training schedule.  It was doing any lifting, twisting, turning, cleaning, etc Kim would need done.  I did get all my miles in, they were urban miles, not my favorite, but some of the views were spectacular!

Four days before the OT50 I returned home.
Training for 50 miles just wasn't possible this year even though I was entered in that distance.  I did have a solid 50K training base going on.  So once again, .....
I felt good, confident, happy on the starting line.  I excicuted a perfect pace going out to Pinnacle Mountain before our climb up said mountain.
Making up Pinnacle stinks, but it is a stink I volunteer for so no complaining allowed.  Coming down the other side once again, as last year, I sprained my left foot as it rolled off the side of a rock &^%$!!!  Not again!  Last year I was able to run it out last year and had a PR on this course.  I immediately knew it was in worse shape than last year but talked myself into going on so I could qualify for High Miles (300 miles) for the Arkansas Ultra Running Association UTS Series
and to earn that new race medal.  It was just too easy to listen to the wrong voice and make the wrong choice.  So I went on, not dropping as would have been the wise choice. 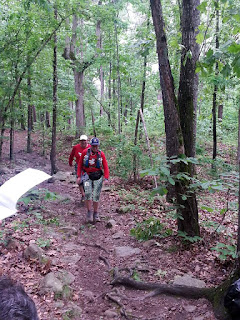 
I met Mark Goodson shortly after descending Pinnacle Mountain.
We ran for about 7 - 8 miles together.  Well, we hobbled.  He too was nursing an injury.  We hobbled up hill and during the super technical parts and ran or something akin to running on the flats and smoother downhills.  At that time Mark was starting to feel better and it was time for him to speed up and get on down the trail.
Mark is entered in the Arkansas Traveller 100 as his first 100 mile race.  Happy training Mark!

Walking/hobbling/jogging the smoother places was done until I hit pavement.  There was no running on pavement.  Even fast hiking hurt like crazy.  So walking was in order.

When I got to the last aid station at East Pinnacle Tom Avery was there waiting for me.  He had asked Chrissy if he could go out and run me in.  The thoughtfulness still leaves me speechless!  Kimberly Stoneman was also at the same aid station, so the three of us walked it in talking.  It was a great time and a grand way to suffer through those last miles.

This is the second time I have injured this same foot in the exact same way.  As I write this, 18 May 2017, its almost four weeks since this injury.  There is a small bump at the point of injury.  It is still a bit sore.  I'm not running.  I am back to walking, hiking, stair stepper, cycling.  When I can run again I will be in better shape than when the injury occurred.

April 29, 2017, Saturday we, Team RWB Central Arkansas teamed up with Fleet Feet Easy Runner to put on a single day beginning trail running clinic.  We focus on the questions a new runner or a seasoned runner new to trails would have.  We do this every year.  What a treat it is to see the spark start in a new runner's eye after a few runs on the trail!

Daniel got a few days of leave and came home for a visit.

That is a wrap for April


Posted by shebalynnx at 3:43 PM No comments: