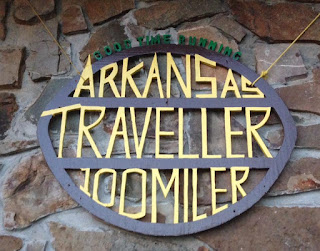 I have to get this written down before I forget the lessons.
Over-hydration - use rock salt before vomiting
Blisters - going back to the drawing board, starting with wide sized shoes

My plan was to use the same race management techniques I used at Do-Wacka-Do 50 Miler.  That day was hot, this race would be hot.  This race has shade, that one didn't.  It should work out right?  Right!

I purposefully don't use the GPS watch as it will stress me out to be checking my pace all the time and I would.  Using perceived exertion doesn't work either as the excitement is too great and I have a hard time gauging actual exertion.  I discovered a way to keep things chill when they need to be chill.  I only breath through my mouth.  As long as I can breath through my nose only I'm not going out too hard.  It worked well.  That first 16 miles went as planned and on schedule.
I was only in the Sylvia aid station 4 minutes and out.

Between Cross-roads and Pumpkin Patch at about mile 20 I realized I had been drinking too much water, over-hydrated, and my stomach was telling me about it.  I know that a good upchuck can lead to a good stomach reset so that is what I did.  Almost immediately things started feeling better.
I did spend another 3 minutes at Pumpkin Patch taking an alka seltzer and getting an ice bandana ready, it was starting to get warm.
My stomach still wasn't right, but it was getting better.  It took me a full hour to go the 2 miles between Pumpkin Patch and Electronic Tower aid station!  I didn't drink any, I did rinse my mouth out every 10 minutes.  With ginger ale in my tummy and ice bandana refreshed it was off to the Rocky Gap aid station 4 and some odd miles away.  Again I just sipped and washed my mouth out instead of drinking.
At Rocky Gap the volunteers were like the very best pit crew!  They had me in and out in 2 minutes with ice in my hat, my bandana, 3 cups of ginger ale on the rocks and an alka seltzer.  I was starting to feel better so after that first climb I was able to run and I did, every downhill as fast as I could because I knew I was behind schedule.

Lake Winona Aid Station:
35 minutes.... that is how long it took to fix my feet to get back out there.
After Do-Wacka and all those blisters after I spent the summer working out the blister problem I invested in the book Fixing Your Feet - the 6th edition by John Vonhof.
I had spent the last month figuring things out and though I had it down, well I didn't.  Both big toes were blistered along with the inside of both heels.
At least, thanks to the book, I knew how to fix them and I had the supplies, it did take time though.

My amazing crew sent me off with some pain killer and a warning about the miles and time I had left.  I ran every downhill, run walked the flats, run the undulations, it just wasn't enough.  I could have overcome one problem either the over-hydration or the blisters, but both together was just too much.  I got to Powerline outbound 15 minutes after the cut off.  I hugged PT as he cut my armband off.

Finishing is winning.  What happens when you don't finish?  How can you still "win"?

Now I define a different win:
Feel true joy as I go back to the aid station and help runners achieve their dreams.
Maintain a good attitude.
Have grace for myself. The same grace I would give to any runner who didn’t achieve a goal they had worked so hard to achieve.

I’m truly grateful for my pacers and crew, they gave their full
love and attention to me for the weekend.  I don't have the words to express my gratitude.

❤️       to .
The temperature highs on Saturday were 91 degrees.  I think that is the hottest Traveller ever.  Kevin W. Griffin put together the following chart showing temperatures and finishing rates over the past few years.

I'm committed to pacing Chris Beason next year so it will mean a year of not training for the Traveller.  It kind of feels unreal now to not have that as a goal for 2018.  It will be a fabulous to give back to Chris who as given me three years!

P. S. 12 Oct 2017 Thursday
My brother, Rich, called me last night and we talked for a bit.  I was whining and complaining that I had so many negative thoughts and how the energy to shut them off may have been energy used to make my legs go faster.  He reminded me that that is normal.  I did have a plan and executed that plan to shut those negative thoughts off.  That is a win, not a loss!
Thank you Rich, that helps a lot!

Posted by shebalynnx at 9:11 AM No comments: 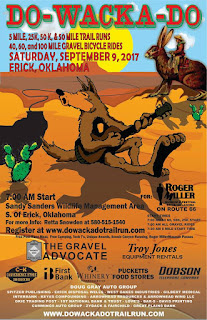 Pre-race:
I'm saving for a major truck repair so while this isn't an expensive race it was still hard to give myself permission to participate.
All the way up to the time we were on the road I kept second guessing myself in doing this, spending the money, and all the "what-ifs", the war between our ears.
Road trips with Chrissy are always worth it.  It will be a good test of mental toughness, physical readiness and race day strategy.


The Plan:
Manage myself and my thoughts.  This race takes us through the start finish area twice to run the 50 miler.  With that in mind I had to be there to run the 50 miler and nothing less...... But.... With forecast temperatures in the mid-80's I had to keep in mind that this was a training run not the key race thus if the heat started becoming too much I would have to take a shorter mileage finish.  So the challenge is to manage the mindset to run 50 miles but have the smarts and grace to forgive myself for less if that is where the day would lead.
Drink every 10 minutes
Eat every 20-30 minutes
Any sign of stomach distress use Gut Shot, ginger chews or other means to manage it early
Keep my skin out of the sun
Slow down as the weather heats up
Use all the ice allowed
Use ice bandana
Carry enough fuel for the first lap in case they do not have gluten-free food on the course

First lap:  4 hours 13 minutes
I ran all the downhills and most of the flats.
I took some pictures and really tried to have fun.
I stuck perfectly to the fueling and hydration plans.
Starting at the second aid station I started drinking a pickle juice slushy (about 2 oz each) and a Cutie Clementine Orange at each aid station.  As of yet the ice bandana wasn't needed.  I left the trekking poles at the start finish area to see what the course was like before deciding if I would use them.
The downhills were super steep and the uphill gut busters though not long.  There is rough terrain out there going into and out of gullies.  Before finishing that first lap I knew I was going to use the trekking poles for the rest of the race.

Aid Station Management Lap One: (start/finish/drop-bag area)
Left the little camera in the drop bag so I wouldn't be tempted to take pictures
Picked up trekking poles and ice bandana
Reloaded fuel - I have to carry my own as not enough gluten free on course (not a complaint - just knowledge)
10 minutes in aid station

Second lap: 4 hours 27 minutes
This lap was all about managing mind and heat.  I slowed down some.  I drank pickle juice and ate a Cutie Clementine Orange at each aid station and refilled my ice bandana at each aid station.  I also wet the sleeves of my long sleeved sun shirt.
The trekking poles were a very wise decision it really helped climbing out of those gullies
It was HOT and the sun beat down.  Managing attitude was as important as managing heat.
Hats off to the race organization, they did not run out of water, they did not run out of ice!
I thought I would have to struggle with wanting to quite at 50K.  I did not, not once did I want to stop before 50 miles.

Aid Station Management Lap Two: (start/finish/drop-bag area)
9 minutes in the drop bag area, renewing ice bandana, refilling fuel/water bottles.  I wanted to change my socks but had left them in the truck and didn't want to take the time to run get them.  So out I went with a few hot spots and 16 miles to go.  I left the start/finish area with 1 minute left before the cut off.  whew!


Third lap: 4 hours 40 minutes:
The anticipation built for shade... on this lap the sun would get low and then set, this means RUN!
I got to the second aid station realizing I didn't drink enough so far in this third lap, this is the only time I got behind on hydration during the whole race.  So I made note to pay more attention to that as it gets late in the race.
Climbing out of those gullies became harder and harder.  At that second aid station I found out I was the last person to continue on to 50 miles.  They were going to close down the aid station as soon as I was through it.  A volunteer told me that they were going to follow me in their 4-wheeler for the rest of the course.  I begged them not to.  I told them I run 30 miles alone at night in the woods, I can do this.  If they are behind me for 9+ miles that would add stress that I didn't really need.
After they packed in the aid station they caught up to me and told me they had to follow me but they would hang way back.  I told them okay and I appreciated them hanging back.  I wasn't listening to anything on my iPod at that point but put in my earphones to listen to music so I wouldn't hear the engine of the 4-wheeler.  After a few minutes they came up beside me and told me they would go to the next aid station and wait for me.  Thank goodness!


I did see those volunteers along with the volunteer from the next aid station and thanked them for not following me.  By now it was sunset time.  I had been running the downhills and most of the flats for about 90 minutes.  I did take a moment to take a picture of the sunset.  I had been out here all day and I had managed it.  I wasn't doing a death march.  I wasn't crashing, I wasn't thinking I would never run again and I wanted to burn my shoes! - Yes, my feet did hurt!

I saw someone up ahead.  I started to think I could pass them, I wasn't going to finish DFL.  So I ran, and ran, and ran.  I caught up to a friend having a miserable day and a friend who was walking in with her.  She encouraged me to go, go, go!  It was exciting.

I did use my headlamp.  I did get in after dark.  I did have the biggest smile on my face!  It was a thrill to finish smart! to have run a smart race!  to have a challenging course/heat and to have managed it well.  This was by far the best managed race in my short running life.

I found my reason why, and I have a bit more confidence going into AT100.

Thank you Chrissy for inviting me to go with you, it was worth it, I learned so much, you make the best company!

Posted by shebalynnx at 12:42 PM No comments: