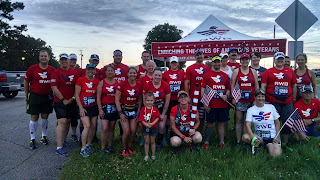 Soon after that the wheelchair participants were off, then the rest of us.  My plan was the normal 1/2 mile run 1 minute walk.  That minute never came.  About the time it was time to walk someone would thank me for running with Old Glory.  I couldn't stop running.  At other times people would ask me if they could carry the flag.  Of course I let them.  If someone was near me and having a hard time I asked them if they wanted to carry Our Nations Colors, they always did.  They said it helped them run strong.  One guy took off with it, 10 minute mileing!  WHAT!!!  Guy, your blowing my plan!  So mid race I got a little 2 mile tempo run in there. 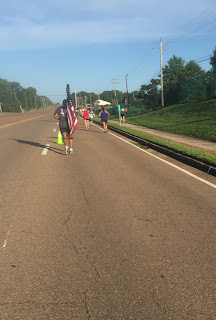 Much of this course is on base.  There wasn't many spectators or crowds about, for me that is great!  The smaller race is great too, kinda like them less crowded. 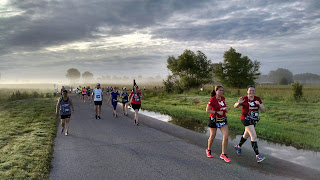 It was very hard not taking walk breaks.  I kept the negative chatter out of my head.  Chrissy running every step of the 15K UP Mount Magazine the day before really inspired me!   This course is rather flat, if she can run up hill that distance, I can run a flatter race!  10 Nautical Miles = 11.5 miles.  Much of this course is shaded.  This is a reason to be glad.  It was getting hot by the time I could see the finish line!  After crossing the finish line in 2 hours 14 minutes they handed me my well earned medal and a towel that had been soaking in ice water.  Oh that was glorious! 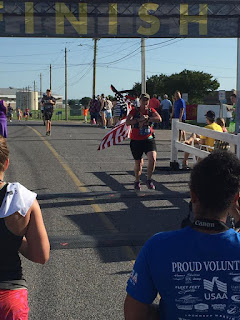 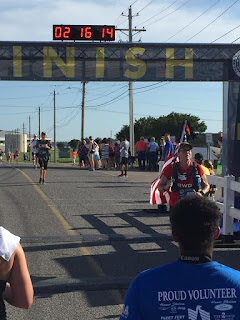 Very often I'm at a road race without many people I know.  Being there with so many AR people meant visiting afterwards.  I hung out for awhile.  All the food was sandwiches and pizza so nothing I could eat. 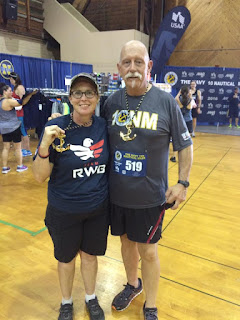 I drove home and was at my front door by noon.  Next up, a nap and a large meal! 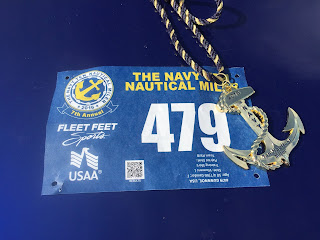 Posted by shebalynnx at 4:55 PM No comments: 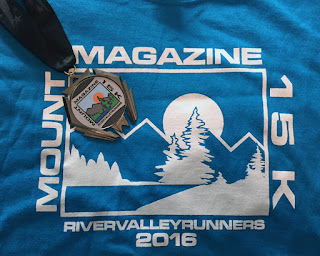 Chrissy mentioned doing this race.  She had a goal of running every step of the 9 miles up the mountain.  Hills are scary, but hills make us strong.  So I said yes to this race, my first time.

We start at the high school in Havana, AR.  There is about a mile of dirt road, then turn onto pavement heading toward the mountain.  There is about two more miles of rolling road, no climb yet.  About at mile three, the first aid station, the climb begins.

I'm having iPod problems.  I have the voice over completely shut down, but it will go wacko bird on me and start voicing everything on my iPod.  So I said a wordy dird, yanked out the headphones, stopped at the aid station, did 10 push-ups for the cuss word, then headed up the mountain.

This is the summer of living bravely, so that means hills must be attacked bravely.  I have a plan for hills, if they aren't too steep to require walking.  I walk 30 steps, run 30 steps, repeat.  That is what I did, every step, never missing a repeat.  It felt great to stick with the plan and do it so well.
2.:13. 45 was my finish time with a pace of 14:31 minutes per mile. 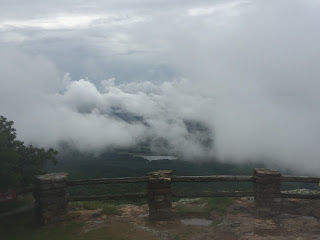 Many of the runners turn around and run back down the mountain.
Chrissy was very tired from her effort and with a race the next weekend decided not to run down the mountain.  I set off to run till she got her car and picked me up.  I got a good 5 miles downhill running in after the 15K.

The first of these weekends was going to be from Wednesday May 25 - Saturday May 28.  These days were chosen because Chris would be on the road and this would have the least impact on our family.

After gutting out hills over the last two weekends, these runs were about race pace.  This means walking hills and just being steady!

It gets hot out there!  I'm not speedy!  So I like to start early so I can get done and there will still be people at the finish line area!  Its more fun that way.
Eddy and I started at 6AM with the run started at 7AM.  Tee and Wess decided to start early too.  We all go to the top of North Fork Pinnacle in the Ouachita National Forest and very near the Ouachita Trail. 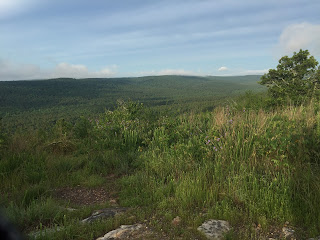 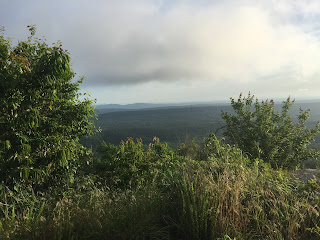 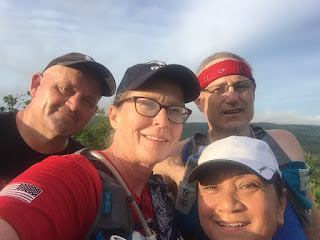 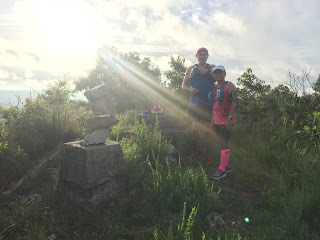 Our goal was to maintain an ultra "race pace" throughout the whole run.

These forest service roads are either uphill or uphill, with a few downhills sprinkled in for the fun of it.  Hardly as step is flat so it makes a great training stage.

At the 9.5 mile aid station ice was a treat to behold.  We were still working very hard to maintain pace.  The weather was starting to warm up as well.  At this location we move off the road to a trail that takes us to the top of Flat Side Pinnacle

It was joyful to make this climb to see this view!  This is one of my favorite spots in the Ouachita National Forest!

After going back to the aid station we knew even though we were only half way through the run, we were on the home stretch as most of the hills were behind us.

The rest of the run was just gutting it out on "go".

By the time we came off of Brown's Creek Road the weather was getting hot.  This last stretch of the run is on pavement.  The heat was radiating off the road.
"no complaining, this is heat training, no complaining"

Posted by shebalynnx at 2:48 PM No comments:

It was with great joy that Women Run Arkansas 5K and Mount Magazine didn't fall on the same Saturday as it does often.  Its so great to be at them both and its fabulous to be able to attend both.

Most often I don't sleep well the night before.  So instead of waiting till the alarm went off to get up I left the house at mid-night, drove to Mount Magazine and slept till it was time to get up and get ready to run.

The day started nice, no cold rain is always a nice way to start.
The trails on Mount Magazine are magical!  Normally the wild roses are in bloom along with numerous other wild flowers, blankets of fog cover the trails, its cool and beautiful and magical.  If fairies and unicorns started dancing on the trails it wouldn't be a surprise, they would just fit right in.

The plan this year was to run the hills, kill it, hang on for as long as I could then manage what was left of the race.  Execution, just as planned!  It doesn't get better than that.Chrissy and I started the race talking about future runs, training and everything wonderful.  I decided I would try to stay up with her till it just wasn't possible any more.  She runs uphill!  So it took some mental arm wrestling to shut up the negative narrative about how far I could run before falling out.  I'm so glad Chrissy wasn't racing this day, but running!  whew!  I stayed with her through mile 6ish, then she stayed with me through the rest.  We hit the 9 mile aid station averaging under 15 minute miles which is flying on technical trails for me.  What is this running uphill?  Who is this doing the running uphill? Oh, that is you Lisa, you are running uphill!

If one doesn't like the idea of trail running, go for a hike!  Mount Magazine is magical!

After getting to the aid station at mile 9 there is an out and back, down down down on a mountain trail for 3 miles, then back up!  Some kind soul had taken a weed eater to this never used trail so the grass was tamed.  Its on the side of the mountain in deep foliage, so it doesn't get sun.  The trail was super slick!  wet! and some spots of mud!  It wasn't a fun downhill run, it was a slippy slide carefully done to preserve life and limb.
At the turnaround at the bottom it was starting to get toasty warm.  Down on the trail in the deep foliage the wind doesn't blow much, so the warm, humid, mug just hung in the air.  Our goal, back to the aid station in 1 hour.  We didn't talk much, we hiked, we didn't stop a step, we hiked.  We got back up the hill in something like 52 minutes, goal achieved!

This view is between mile 15 and the finish line.

After getting back up the hill at the mile 15 aid station we knew we would beat last year's time.  We did walk more than if we were racing.  That is okay, the big dance is the Arkansas Traveller 100 in October, this is a training run.

It is magnificant spending time on the trail with a dear friend!  It is fun to get back to the starting line while people are still there!  The cheering, the food, the hugs, the love, the ice cold Mt Dew, that makes it fun!

Lessons Learned:
- Running with a group can be so much fun!
- Nutrition plan is  working great 33 Shake for the most part,
supplement with anything else that looks good
- Trekking poles save lives!

Things to Improve:
Keep doing hill training
Keep up the brain training - shutting down the negative chatter is paramount to good performance
Stop goofing around with food and drop those extra pounds