My twin brother, from another mother (and father), Bruce Berkheimer, came in to Bike City today.
We were talking about my weekend adventure of running my first 100K.

I was telling Bruce how I had learned a few things about myself in the last few months.  At the AT100 aid station I learned I didn't have the mental fortitude to go back out in the cold, wind, miserable, rain as did the runners of that race.
This last weekend I learned that I wouldn't have gone on for 38 more miles.

Bruce grinned at me and reminded me that I felt the same way after my first 50K.  I was just as scared and overwhelmed, but just kept running.  In a few more years I would be ready for it.

Thank you dear brother!  I completely needed you to put it into context for me.

Happy riding! running and just being :)

Posted by shebalynnx at 7:53 PM No comments:

Race report to follow.  I can't get my brain around it yet.  All I know right now is what I'm not ready to do, not what I can do.  That kinda scares me.

Stay tuned.
Posted by shebalynnx at 6:33 PM No comments: 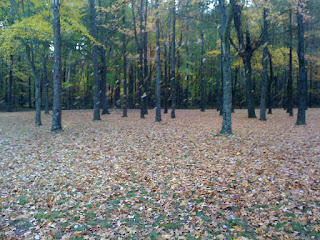 A perfect day for running, it was raining leaves in the early autumn air

Oh pavement how I hate you!  This race is 9 laps on a paved bike path a wee bit over 3 miles around.

I'm weary of DFL's, been there done that way too much, but I'm okay with this.  I'm still coming back from a summer of not running, poor nutrition, wheat allergy reaction going on day 4, beat up by pavement, things are okay.

I didn't manage my pace well.  I got going to fast enjoying a conversation.  So to greet me at about mile 18 was Mr You Ran Too Fast Bonk.  I hate this during a marathon, during an ultra it just stinks!

My plan was to run 1/4 mile walk a minute then repeat  124 times.  I walked more than planned, forgot my sandwich on a few laps, filled my backpack with ice but no water so ran out of water on one lap.

I walked most of the second to last lap with Nicholas.  My plan was to be so baddass and use my music for the last lap.  Last lap, grab music, take off, stop at the port-a-john, never see Nicholas again!  He dropped me.  I ran a bit to fast trying to catch up and then had trouble breathing after that.  I told Nicholas that I discovered too late, that his company was preferred to music.  Bummer for me! 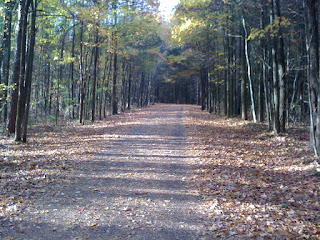 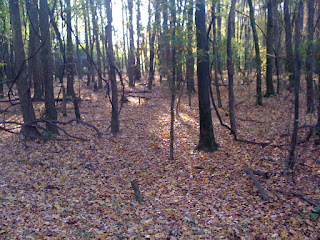 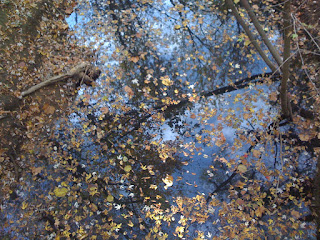 The next race in our AURA series is also on pavement.

December will take us back to the trails!

Nicholas, send me a link to your blog and I will link it here.  Thanks for some fabulous miles, and forgive me for deciding I wanted my music more than conversation.

Posted by shebalynnx at 6:38 PM No comments:

My friends at the Jester Nation reminded me of the importance of volunteer race reports, so here goes:
Oct 2009 was my first experience with the Arkansas Traveller 100 and the Pumpkin Patch Aid Station (mile 22 outbound, mile 93 inbound).
Chrissy Ferguson, one of the race directors, asked me if I would volunteer at the Pumpkin Patch, Kim Fischer was the aid station captain, I had not met her yet (or anyone else there). 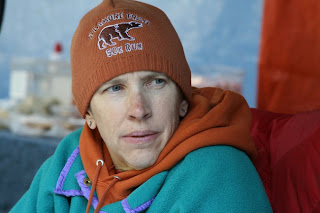 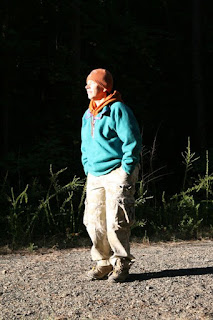 Kim the morning after a very COLD night, enjoying the first rays of the morning 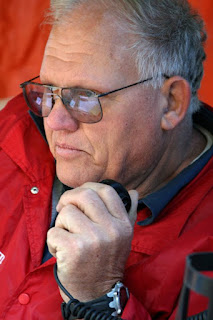 I showed up Saturday afternoon after the outbound runners had come though, I went straight there from work in the Searcy, Walmart Bakery.  After a short nap it was time to make the soup for the night shift.  We have chicken noodle soup and potato soup for the runners thought-out the cold night.

I was not spiritually prepared for what I was about to behold!  By mile 93, anyone who has the self discipline to train for 100 miles, looks beautiful! spiritually!  I think God granted me a very small glimpse of what He sees, in us, His children.  We all hide behind masks of our own creation to protect us from the dangers in our individual worlds.  At mile 93 that mask is gone, what is left is beyond words beautiful!

My best image to show what it must feel like to finally make it though the night is this image.  I do not know the name of the runner. 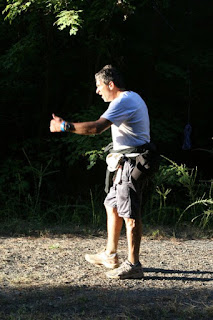 After the experience I was hooked for life!

My husband, just because he loves me, came to help.  He isn't particularly social, so this was a true gift of love.  He kept me organized and together so I could make sure things happened and needs were met.
My lesson from 2011, no dogs allowed!  I'm not going to tell that story!!

Chris was miserable, on the way home he told me to never ask him to do that again.  He found himself making plans for 2012!

Is something wrong with me? (Don't answer that)  I saw the faces of the runners at mile 93 and thought; "I want to do that".  Wow!

2012
Chris's best friend, Vance, wanted to go again, so that was the hook that got Chris to agree to go again.  I can't do it without him, he keeps me organized.  He, with ease, sets up and breaks down camp.  Chris started looking for cool decorations and ideas to start building Pumpkin Patch year by year.

This year was special.  I had the best volunteers ever!   A few aren't runners, yet, a few wanted to see what this kind of adventure looked like, a few are working and planning for a future 100 miler of their own.  Some paced or crewed runners and worked at The Pumpkin Patch between times.  One guy dropped from the race and spent the rest of the race at our aid station with his girl friend, who was volunteering.  He helped us put out glow sticks for the night.

We had a cold year this year, a very cold, rainy miserable day, the first day of the Traveller. 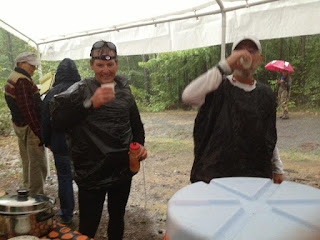 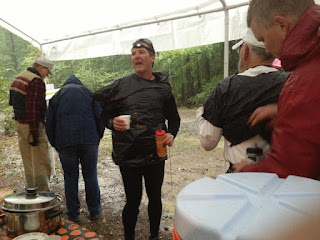 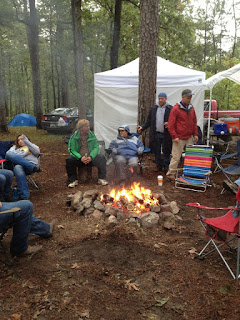 Kevin King kept the fire roaring!  Thank you Kevin!  This fire was a must for this race.  Kevin kept the runners warm and kept us thawed out.

We normally have soup in the evening for the incoming runners.  We changed that plan this time around, it was so cold we had soup ready to go in the am.  We handed out trash bags to used as rain covers.  One lady wrapped them around her hands for protection.  We started suggesting that as well.  We sure didn't want anyone dropping because of the cold if we could help it.

My hope and dream is to be able to run this race by my 50th birthday.  It was so cold!  The runners were so cold!  The rain was coming down so hard.  I realized if I had entered that race, I couldn't have gone on.  I would have been done by mile 22.  I'm not that tough.  That realization makes me sad. 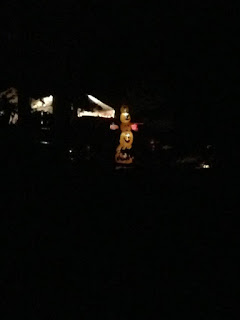 We took shifts sleeping and nursing runners though-out the night.  Sleep never felt so good than snuggled in a sleeping bag in the car with the heater on.
We have ham radio operators at each aid station.  We don't clear our aid station till the last runner has made it to the next check in point.  This allows us to keep track of every runner, knowing within a few miles where each is.
After this long weekend there is nothing sweeter than the radio guy telling us the last runner made it to the next check in.  Yay, we can go home!
Home means we all went back to race headquarters for the awards ceremony,  then we clean up race headquarters and head for our shower and our bed.
Its funny how the planning for the next year starts before we even get home.


Posted by shebalynnx at 5:09 PM No comments:

This is What a SuperHero Does!

My running brother, Mark Cato was running a recent marathon, Mid-South Marathon in Wynne on 3 Nov 2012 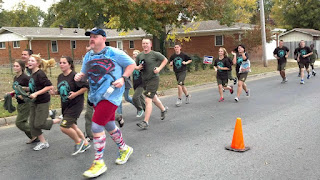 Dear Brother Mark met a runner who was injured and having a hard time.  This runner ask Mark to run with him, Mark did, sacrificing his performance to help a fellow runner.
Way to be Mark!  Way to be!


Posted by shebalynnx at 4:54 PM No comments: